What we can learn from pharmacy chains in Latin America

A new SHOPS Plus brief examines the decades-long trend of individual retail outlets consolidating into chains across Latin America, exploring the factors that have facilitated and limited the growth of pharmacy chains and the subsequent risks and benefits for public health. Framing this analysis is the question of how governments and donors in the emerging markets of sub-Saharan Africa and Asia can use private pharmacy chains to increase access to priority health products and learn from experiences in Latin America.

Pharmacies and other private retail shops are often an individual’s first point of contact with the health system and are crucial sources for contraceptives, particularly among youth and urban populations. Market fragmentation and stock outs have made the development of pharmacy chains an important step to increase access for priority health products. However, chains in Latin America faced a number of hurdles, including stringent government regulations that limit ownership, supply chain limitations, requirements regarding pharmacy staffing, product and pricing rules, wavering interest in public-private partnerships, and varying capacity to pay for health products. As pharmacy chains made strategic investments to enhance customer satisfaction and demand for health and family planning products rose, pharmacy chains began to flourish despite these barriers. 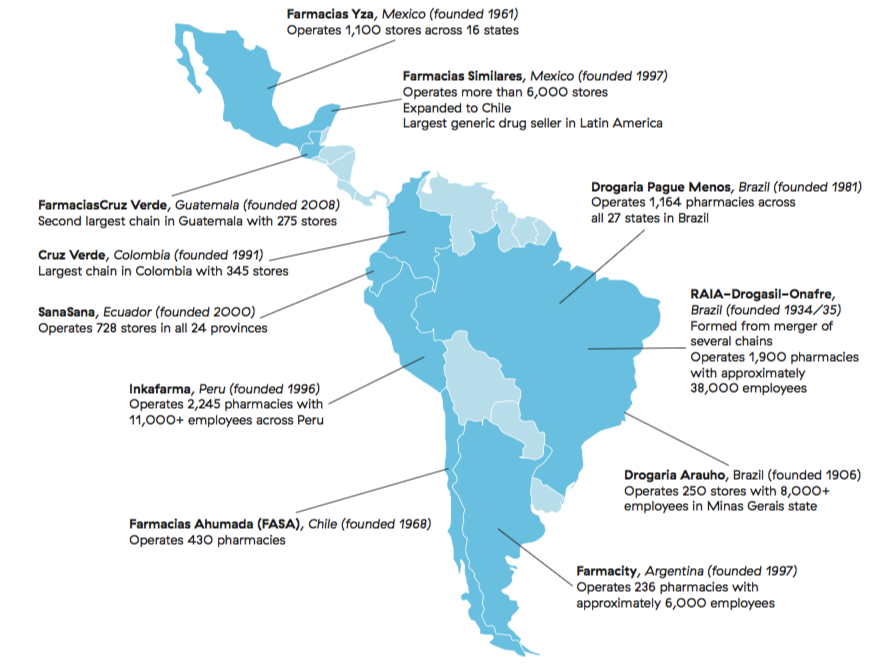 In Chile, Colombia, and Peru, only a handful of retailers now operate more than three-quarters of pharmacies. Similar consolidation has begun in sub-Saharan Africa and Asia. All of the chains examined sell a mixture of health and other products, including prescription, and over-the-counter medicines, as well as vitamins and general wellness products. All offered male condoms, oral contraceptives, and injectables, and some additionally sold implants and IUDs. The chains operate under varying ownership models, and have attracted external investment from North American companies such as CVS and the Walgreens Boots Alliance. This analysis found that chains followed three basic strategies to expand from standalone outlets:

Understanding how Latin American chains emerged and grew can inform strategies for supporting efforts across the globe. SHOPS Plus reviewed secondary literature and conducted key informant interviews with chain representatives and local experts to provide an overview of Latin American pharmacy chains and growth strategies that provide lessons learned and best practices for sub-Saharan Africa and Asia.

Read Understanding the Growth of Pharmacy Chains in Latin America.